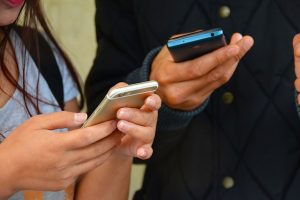 Adolescents spend a lot of time using screens for different activities like social media, gaming, watching tv/movies, and sometimes even homework ;). Since screens are a regular part of our daily lives it’s natural to wonder what affects all of this time spent in front of screens might be having on young people’s development. Over the last few years, multiple studies have reported on screen time and its link to depression. One group of researchers recognized that many of the previous studies linking screen time to depression were methodologically limited and the results from these studies were inconsistent. The group’s aim was to understand whether the specific type of screen time, i.e., social media, television, video gaming, and other computer use, was important in understanding the link with depression.

The study, published in JAMA Pediatrics, was led by researchers at the University of Montreal, Department of Psychiatry, the CHU Sainte-Justine Research Centre in Montreal, and the University of New South Wales in Sydney Australia. It included adolescents from 31 different schools in Montreal from grades 7 to 11. In total, they collected information from 3659 adolescents across a timespan of 4 years. The students answered questions about depressive symptoms and noted how much time per day they spent playing video games, using Facebook, Twitter, or other social networks, watching shows or movies on television or on the computer, and other computer activities. Finally, the students also answered questions about their self-esteem and amount of exercise.

The Effect of Screen Time

The study reported on two types of associations between screen time and depression, those based on changes across the four year period and those based on changes within a given year. High usage of social media over a 4-year period and any further increase in social media use within any given year were both associated with an increase in depressive symptoms. Both of these associations were not found with other types of screen use. Interestingly, videogaming was not associated with depressive symptoms.

Based on the self-esteem findings, the researchers hypothesize that repeated exposure to unrealistic and idealized images through social media and television serve to decrease adolescent’s self-esteem. In adolescents with depressive symptoms in particular, using social media may exacerbate their depressive mood and depressive state of mind.

The researchers acknowledge that the specific type of content adolescents are exposing themselves to on social media and television is important to study and suggest that more research is needed to understand that factor. At this point however, this is the first study of its kind and sheds light on the worsening of depressive symptoms by social media and television use.