Mention Valentine’s Day to a group of people, and you are likely to receive a range of reactions – excitement, indifference, ambivalence, or even anxiety. Often times, it is not the occasion itself that provokes these mixed reactions, but the perceived expectations that come along with it – to make a grand gesture, plan the perfect date, or come up with something “straight out of the movies”. 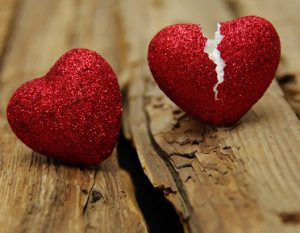 We watch romantic movies and television shows for a variety of reasons – to laugh, cry, identify with the struggles of fictional characters, and, sometimes, escape from our daily routines by imagining ourselves as part of a fictional, larger-than-life love story.   However, when we find ourselves comparing our own relationships to Hollywood romances, we can start to question whether our partners, our relationships, and we measure up. More importantly, should we even try to aspire to these romantic “ideals” in our very real, long-term commitments?

The Myths of Hollywood Love

Many movie fans can associate this line to the classic 1970 film, “Love Story”, even if they have not seen it. This line is first spoken by Ali Magraw’s character to Ryan O’Neal’s after he apologizes to her for losing his temper.

One can argue that Ali Magraw was trying to tell her partner that she loves him unconditionally, even when he makes mistakes.

Conveying this sense of acceptance to your partner can definitely strengthen your bond as a couple. However, acceptance does not mean allowing your partner to treat you poorly, or questioning their love for you when you behave badly. Unconditional love does not mean we do not have to accountable for our actions.

John Gottman, Ph.D., has written and co-authored a number of books on relationships, including “The Seven Principles of Making Marriage Work” and “and Baby Make Three”. Dr. Gottman’s research on couple communication indicates that making what he calls repair attempts during or after fights can actually strengthen one’s relationships. These repair attempts can include stopping an argument that has eroded into a vicious cycle, recognizing when we need to calm down, and, yes, even saying “I am sorry” when we have done or said something hurtful. Making genuine repair attempts shows our partner that we respect them and will do our best to treat them with greater respect in the future. It seems that in fact, love does mean saying you are sorry when you recognize that your actions may have negatively impacted your partner or your relationship.

As far as iconic movie lines go, this one from “Jerry Maguire” tops many a film fan’s list. The title character, played by Tom Cruise, spends the film struggling with an identity crisis, much to the

chagrin of his long-suffering co-worker/wife, Dorothy.  At the end of the movie, Jerry has an epiphany, says these words to Dorothy, and appears to resolve his inner struggle.

This idea of finding one’s soulmate, that one person to make our life complete, has been around long before this popular film, even films themselves. Many couples do genuinely feel that their lives were made better after they committed to the person they love and that their mere presence in their lives contributes greatly to their overall wellbeing. However, this expectation can be taken too far – for example, if we make our partner-to-be responsible for how we feel, blame them when we experience negative feelings such as sadness or anger, or expect them to read our minds instead of communicating our needs directly.  While most couples may occasionally experience these misunderstandings, a pattern of such unrealistic expectations could actually push our partners further away, as they may fear “losing themselves” in the relationship.

Dr. Sue Johnson, author of such books As “Hold Me Tight”, suggests that couples with the strongest, most secure bonds, develop a sense of interdependence. She describes interdependent couples as those who respect and maintain healthy, personal boundaries while remaining open and accepting towards their partner’s feelings and vulnerabilities.  They may not expect the other to “complete” them but may see themselves as having a complete life, due to being part of a strong, supportive couple.

In the American sitcom, “How I Met Your Mother”, protagonist Ted’s ongoing search for his true love was juxtaposed by the committed and relatively happy marriage of his best friends, Lily and Marshall.  However, Lily and Marshall’s relationship was not without conflict. For example, an episode focused on the couple arguing about who was the “Reacher” – the one who feels they need to work hard to keep the other, and which one was the “Settler” – the person who lowered his/her standards for the relationship. The belief this TV couple held was that every couple is made up of a Reacher and a Settler – and neither wanted to be the Reacher.

The concept of the Reacher and the Settler (or who is the “Alpha”, or who “wears the pants”) seems to reflect a perception that loving relationships are, essentially, power struggles to be won. Arguments can definitely feel this way at times when we believe that we are right, and the other person is wrong. However, when we find that the majority of our arguments with our partners become about gaining the upper hand, anxiety about the relationship – and where we stand in it – can start creeping in and colouring our every interaction. Sue Johnson describes this as attachment insecurity. When couples are experiencing high attachment insecurity, even small disagreements can quickly escalate into “fights to the death”, where solving the initial conflict take a backseat to maintaining a sense of power and control. Mind you, in these instances, what have you actually “won”?

Actors are paid to play roles, including those of “Reacher” and “Settler”. In real life, it may be more constructive for each member of a couple to focus on the role of “partner”, instead.

“Hate-at-first-site” is another long-standing trope that predates movies and television. A classic example of this dynamic can be seen in the volatile relationship between Sam and Diane of the sitcom, “Cheers”. Prior to their first, explosive, kiss, this duo engages in a heated argument that included insults (“you are the stupidest, phoniest, fruitcake…”), aggression (“Shut your fat mouth!”), and contempt (“you disgust me!”).

While this exchange is played for laughs, it does seem to reflect the notion that one must provoke rage in their partner to ignite feelings of passion. While these types of provocations may get you a strong, immediate reaction, John Gottman notes that this type of behaviour can, over time, erode close feelings and intimacy in a couple. His research even indicates that contempt, or communicating the belief that your partner is somehow beneath you, is the top behaviour that predicts divorce. Sue Johnson also notes that couples who feel safe and secure with one another tend to experience more satisfying levels of intimacy, as well. As hilarious as these fictional, volatile couples can be in their love-hate relationships, perhaps it is best to leave that kind of “drama” on the screen.

If your Valentine’s Day plans with your partner this year includes indulging in a Hollywood romance, enjoy every minute of it!! However, be sure to take the time to separate the “ideal” from the “real”.