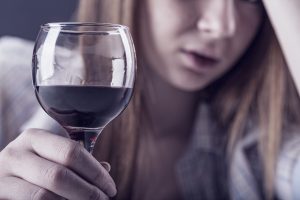 “I believe I was primed for addiction from the day I was born. Growing up, I was an extremely sensitive child. I felt my emotions intensely, cried frequently, and was often deeply lonely. I grew up thinking that it was not okay for me to feel not okay, and as a result I rarely asked for help even when I needed it. Instead, I internalized my feelings and blamed myself for them. The cognitive dissonance that resulted from this drove me to seek maladaptive coping mechanisms at a young age. I started self harming when I was 8 years old, and would scratch my entire body raw whenever I felt anxious. This progressed to more serious forms of self-harming, until I discovered alcohol when I was 13. Drinking erased the loneliness that seemed to plague me, and quieted the anxiety and fear in my head for an hour. I started doing drugs soon after for the same reasons. When I was 15 I developed an eating disorder as a way to further escape my feelings and as a way to try to find some self control in my life.

The difficult thing about living with addiction is it makes sense when you’re in it, despite how painful it is. My life was completely consumed with escaping reality; any moment spent in myself felt like torture. I got through my weeks because I knew I could get blackout drunk on weekends. I obsessed about my grades and weight trying to be perfect, inevitably failing, then covering up my guilt with drugs and alcohol, which invariably led to more feelings of guilt. The baffling thing about addiction is it never occurred to me that maybe all of these things weren’t solving my problems, that maybe that fact I hated myself was the problem. The old saying that addiction is the only disease that tells you you don’t have a disease is absolutely true in my experience. I held onto my addictions like a life vest even though they were drowning me. I loved the feeling of being drunk/high/restricting my food intake more than anything in the world because for those few hours I didn’t feel like myself. I could be anyone I wanted to be. My anxiety, fear, and depression melted away. The only problem was, the second I sobered up all the feelings I felt before came rushing back at full speed.

My relationships with others suffered immensely during this time. It’s extremely difficult to be a loving friend, daughter, or girlfriend, when your life is consumed with not being you. If you hate yourself how can you let someone else love you? Though I managed to hide a lot of my addictions, my erratic and often cruel behaviour did not go unnoticed. I ended relationships simply because my drug use was questioned. I only formed with people who could get me drugs/alcohol. My relationship with my parents was toxic at best, my mother and I getting into near violent screaming matches while my father would try to mediate. The hardest part was, I didn’t want to hurt anyone. I genuinely wanted to love and care for others, but I couldn’t. I needed those escapes to survive in the world in my reality, and I couldn’t fathom letting them go.

Recovery started when I realized if I kept living this way I would kill myself. At the end of my using, I was drinking to blackout and using drugs every day. I was sniffing glue and drinking hand sanitizer to try to get an extra high. I was throwing up blood from frequent purging (I later discovered that I had damaged my esophagus) and was severely underweight. I was at the point where I was doing everything I could possibly do to not feel, and it all stopped working. I knew I couldn’t keep living this way. I couldn’t even fathom a life without addiction, but my only other option was death, and in that moment I wanted to die more than anything in the world.

What saved my life was making that decision to not die. I spoke to my therapist at the time, who called my mother who then took me to the hospital. My recovery started with a 10-day inpatient stay in a psychiatric hospital followed by a month-long partial treatment program. After being discharged I joined a Twelve Step Group which I am active in to this day. July 13, 2016 I celebrated four years in recovery, and I can say with confidence that that terrified decision I made years ago to not die gave me a life I never imagined I could have.

Recovery is not easy. In the hospital a counsellor once told me, “If you’re not uncomfortable, you’re not making progress.” and that has absolutely been true in my experience. Recovery is so much more than getting clean or eating food again; I have to relearn how to live my entire life. The way I see myself and the world is what drove me to be an addict, not the substances I abused. Recovery is not comfortable. At times recovery is not fun. But recovery is the greatest gift I’ve ever given myself, because it allowed me to do so much more than not kill myself. I love myself today. I love my life today, and that’s something I never dreamed I could have.”