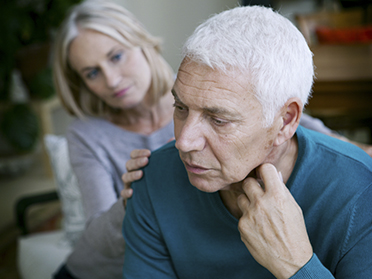 Overall, about one third of all marriages in Canada end in divorce, and the rate is somewhat higher for remarriages. Although the number of divorces in Canada greatly increased after the Divorce Laws came into effect in 1968, the divorce rate has remained more or less stable over the last few years.

Couples with marriages between three and five years are most likely to divorce; after five years, the risk of divorce decreases slowly for each additional year of marriage, and by age 65, divorce is relatively rare. Marriages in Newfoundland and Labrador have had the lowest divorce rate of all Canadian provinces.

In Quebec, however, the divorce rate is highest, as is the percentage of cohabiting couples in Canada (who are generally more approving of divorce as a solution to their couple problems).

Even when relationships don’t end in divorce, couples can have many reasons for not functioning well together, or feeling unhappy. Couple therapy or couples therapy, also known as “marriage counselling” or “relationship therapy” has been shown effective in strengthening couples’ bonds and helping them to address issues that lead to conflict.

The inability to communicate well (sharing important issues, negotiating and compromising, problem solving and decision making) is often reported as a major stumbling block. People blame their partner for being too withdrawn and not willing to talk about emotional issues. Or they describe them as too demanding, nagging, and argumentative.

Couples can also get distressed when they are faced with certain life transitions such as an empty nest, illness, or death of a family member. When a change in one partner’s life occurs as a consequence of  job advancement, new friendships or an extra-marital affair, the other partner often feels excluded or resentful.

Finally, individual problems such as alcoholism, violence, or mental illness may impact considerably on a couple’s functioning, although the opposite is also quite common: couples who have problems in their marriages may subsequently not only suffer from a host of psychological problems, including depression, high stress or anxiety, substance abuse and family violence, but are also more susceptible to physical health problems.

The effects of unhappiness in a couple are not limited to the partners themselves. Research findings suggest that children raised in high conflict homes are more likely to have emotional and behavioural problems than other children growing up in relatively stable families.

Although one does not need to be in a distressed relationship to seek couple therapy (in fact, many people come to counselling to simply enhance their already satisfying relationship), some troubled couples consider therapy only by the time they are at their wits end and have already considered the option of divorce.

The good news is that there are various approaches in couple therapy or relationship counselling that have been quite effective in promoting healthier relationships and saving them from destruction. Given a willingness to work on their difficulties, to have understanding for differences, and to accept what cannot be negotiated, many people can indeed improve their relationships. Some are able to make these changes on their own, but others need the assistance of a couple therapist to help them see their negative patterns of interaction and behaviour, and turn that negative flow into a more positive direction.

After all, no one begins a relationship as a perfect partner. Most often we only have one model (our own family) to go on, and that may not always have been the healthiest one. Successful unions depend not only on the initial “fireworks” and chemistry, when unhealthy patterns learned from a young age on are still swept under the rug, but also on a number of more mundane skill factors that come in handy when reality sets in. Understanding oneself and one’s partner, good communication skills, and the ability to share, support, fight fairly, and compromise are some of those skills.

In couple therapy, therapists focus on increasing positive forms of communication, problem solving and ways partners view and think about each other. Others look more at the past and help to identify the origins of difficulties. Most therapists combine these two approaches.

Like in any other kind of therapy, working on one’s problems is especially hard in the beginning of couple therapy. Because it is often the first time partners have a honest and close look at themselves and their ineffective patterns, they may feel worse first before it is getting better. But once certain beliefs and views have been successfully challenged and changed, and ineffective ways of living and communicating with each other have been replaced by more acceptable and positive ones, people generally become more optimistic about each other, their marriage, and their future together.

Extensive research to evaluate the effectiveness of various forms of couple therapy shows that between 65% and 75% of couples improve substantially at the end of treatment and are able to maintain the gains. The other one-third may improve initially but then relapses, or fails to improve altogether.

One of the most important factors in determining success is the degree of commitment and motivation in both partners to make the relationship work. It is obviously hard to fix a distressed relationship on one’s own, or when two partners have opposite goals. But even when one partner is not willing to enter therapy, there are still some issues one can seek help for alone. These include for instance changing one’s own ineffective patterns, learning more appropriate ways of relating to the partner, or finding more effective ways to enlist the other in seeing a professional together.

To explore the benefits of couple therapy for you and your partner or to begin individual therapy to strengthen yourself or address your own issues in and out of your relationship, click here to make an appointment with a therapist at the Montreal Therapy Centre.